Besides allowing the public to see exactly how pets are treated at MAS, what else have the webcams done?  Has anything good come about as a result of the webcams?  I would offer YES.

Regular readers will remember seeing webcam grabs of Charlotte, the poor kitty being repeatedly poked with a stick at MAS while she was in labor.  After seeing those shots, Meows and BowWows went down to MAS and pulled Charlotte and her 4 newborn kittens.  All the kittens are now in loving homes and Charlotte, who is feral, has been vaccinated, spayed and earnotched.  She will be released, after appropriate healing time from her spay, on the private property of a colony caretaker. 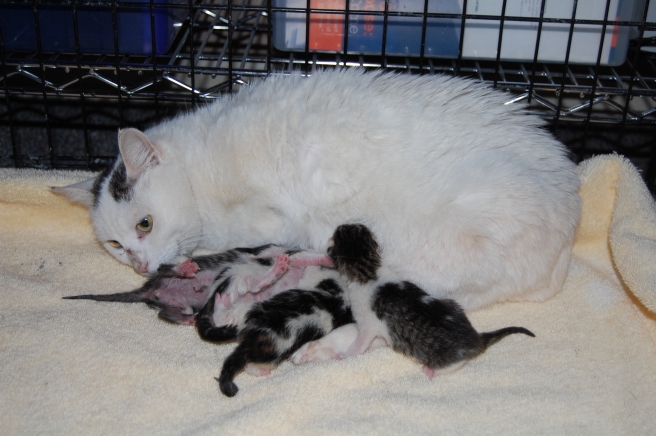 I first saw his picture on the May 10th blog on YesBiscuit called “This is What Needless Killing Looks Like”.  He looked to me to be a sad, white dog.  Seeing him sitting there in the corner cage broke my heart and I posted a comment about finding a rescue group in Memphis so I could adopt him.   The next day Shirley (YesBiscuit) contacted me with the name of a rescuer, Jody, in Memphis that would be willing to get the dog for me.

Then there was Ranger whom we saw being carried by a kind ACO on the webcams.  In response to my inquiry about the dog, MAS gave me a few hours to save his life.  Reader Morgana stepped up with an offer to take him at her NY sanctuary and several Memphians helped get him there.  His vet bill for board and treat was paid for by donations from you guys.

And what about Sweet Jane?  She was another dog I saw on the webcams and she’s now being cared for by a loving foster owner.  Her expenses are also being paid with your donations.

Of course there were other dogs seen on the webcams who we wanted to help but MAS killed them before we could get the chance.  Dogs like Punkin and Mr. Kissyface.  But we tried.  And we only knew about them, like all these pets, because of the webcams.  With the webcams removed, how will we know about any of the hundreds of pets at MAS in need of help?

21 thoughts on “What Good are the MAS Webcams?”