The NC Department of Agriculture has issued a civil penalty notice to Lincoln Co Animal Services: 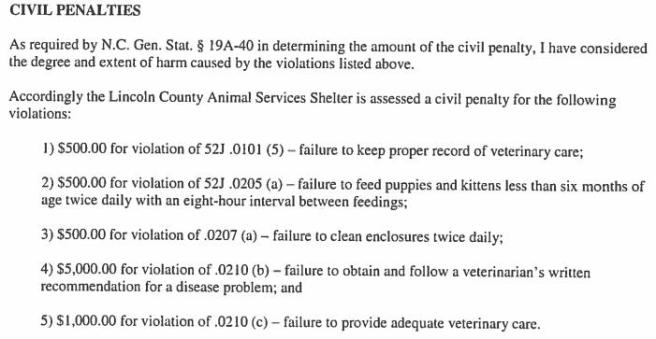 The $7500 in penalties stem from an inspection by the state on October 27 subsequent to the receipt of a complaint about the pound. The state reviewed the records for the facility and found that from May 1 through October 27, 195 cats and 15 dogs were found dead in their cages. The staggering number of deaths are indicative of rampant disease and yet not only was there no written protocol from a veterinarian addressing any disease management, the contracted vet said no one had told her about the animals dying in their cages.

This sounds awful. But never fear, they are doing the best they can:

Channel 9 questioned the director of Lincoln County Animals Services about the violations.

David Workman said the deaths were the result of a respiratory disease that spread rapidly throughout the shelter.
[…]
Workman said his staff was overwhelmed and the shelter was overcrowded. The shelter is a kill shelter and Workman said they’ve been trying to find animals a home before they’re euthanized. Still, he vowed to make the necessary changes.

“We are doing our best here. We put a lot of new policies and procedures that we now have in place now as far medication administration,” said Workman.

As it happens, this story wasn’t the only email I received about the Lincoln Co pound this week.  Someone forwarded me a plea for several animals in need of rescue.  It reads, in part:

The animals on this plea are pregnant or the owner stated they were pregnant. Which that means they cannot be adopted by the public.

The unwashed masses apparently can’t be trusted with pregnant animals. Better that they stay at Lincoln Co where they can be neglected and/or left to suffer until they fall over dead in their cages or the staff kills them. Like they did the dogs they got from HSUS who were part of the “rescued” Alabama 44.

The plea ends with:

Please let us know as soon as possible if you are able to help us with these extra special shelter babies!

Good news: I can help. I can’t personally do your jobs for you but I can offer you some guidance. If you don’t find rescues who are able to take these pregnant animals, let them be adopted by the public with an agreement to have mama and the entire litter neutered when appropriate.  Offer to take the family back for adoption once the pups/kittens are old enough.  Promise that they won’t be killed so someone might actually be willing to raise the pets in their home and return them to you for adoption in good faith.  Or if the person wants to keep one or more of the family members, provide them with spay-neuter vouchers.  Alternatively, ask the state of NC if you can take the $7500 you owe for not doing your jobs and use it on doing your jobs – starting with sheltering these pets.  In short, do almost anything with these animals except neglect/kill them.

(Thank you to everyone who sent me links on this story.)