The state of NC has known for years that a private shelter in Hoke Co was being operated so far below minimum acceptable standards that animals were suffering.  Animals at the Haven were not receiving necessary veterinary care, food, water, exercise, or socialization – and there were way too many for the small number of staff to take proper care of.  During the state’s October 2009 inspection, there were more than 1300 animals at the facility:

State inspectors took dozens of photos documenting neglect during their October 2013 visit to the Haven.  Animals were stacked in dirty cages everywhere including the “isolation” area, inside the dog runs, in the barn and in a lean-to:

Some animals were sick, others were left without food and/or water: 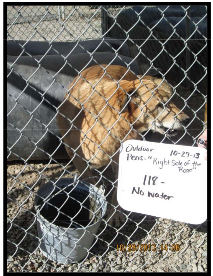 So it would have come as a surprise to no one at the state level when the Hoke County Sheriff’s Office executed a search warrant at the Haven yesterday pursuant to public complaints. The ASPCA was brought in. More than 600 animals have been seized:

“You’ve got animals out here with open wounds…obvious skin conditions…animals that appear to be malnourished,” [Capt. John] Kivett said.

According to the ASPCA, the animals were kept in dirty kennels, cages, outdoor pens and paddocks, many without protection from the elements.

The owners have been charged with animal cruelty and possession of a controlled substance used for animals. Additional charges are likely as the investigation continues.

Thank you to the complainers for not giving up on the animals and to the local authorities for taking action. I dread to think how many more years the state would have kept documenting the suffering of animals at this place without doing anything to help.

(Thanks Lisa for the links.)